A section of Bungoma Muslims are up in arms against what they term as failure by Lusaka to live upto his pre-election pledges. Pledges he made via a Memorandum of Understanding that they now say isnt keen to fulfil. Lusaka they claim in a recent meeting turned a  detailed MoU agreed upon in June into now generalities and therefore a shell of the original MoU.

The Muslim faithfuls have now concluded that Lusaka duped them in June 2022 into voting for him in Aug 2022 only for him to change goal posts after election. They claim the County CEO recently convened a meeting with imams only to arm-twist them and offer peanuts to the now boxed in leaders

This MoU as presented to Rht. Hon. Kenneth Makello Lusaka at the Breakfast meeting hosted at the Hon. Speaker’s Residence on 12th June 2022 by the Bungoma County Muslim Faithful, a Consortium of Imams, Preachers, and Muslim Community, and all other Stakeholders of Bungoma County.

The Bungoma County Muslim Faithful, under this MoU, will be represented by  Hassanali Shabram, Sheikh Abubakar Boi, and Salma Njeri in all other subsequent engagements.

The Parties hereby agree to enter into this MoU in the event of the successful election of the Rht. Hon. Kenneth Lusaka to the office of Bungoma County Governorship. The Agreement shall be guided by this Memorandum of Understanding.

2. PURPOSE AND SCOPE OF THE MOU

2.1 The purpose of this MOU is to develop the scope of Service and Consideration in the County Government of Governor Rht. Hon. Lusaka and Muslims of Bungoma County.

3.1 Heed the prayers of The Bungoma County Muslim Faithful as laid out herein in this MoU.

3.2 Build a County based on good Governance, Constitutionalism, proper application of the rule of law, and a corrupt-free environment for the good of all Bungoma Citizens.

3.3 Create a committed and forthright Team of Governance and Staff for the prosperity and growth of our good County.

3.4 Maintain and Promote the Dignity of Bungomans and Muslims in particular by providing a System that will listen and promptly respond to the various issues that they may want to be addressed.

3.5 Special attention to be directed to Muslims’ few Sponsored Devolved Teaching Institutions as non have benefited in the 10 years of Devolution.

3.6 To recognize those Madrassa Institutions following the laid down structures and Syllabus according to MoE in according them the necessary support.

3.7 As the Lusaka County Government improves on the County Bursaries and Scholarship Program, the number of Muslim Students to be increased on the basis that very few have benefitted from such previously.

3.8 That, Muslims will be considered in all appointed positions on the Various County Boards and Standing Committees. 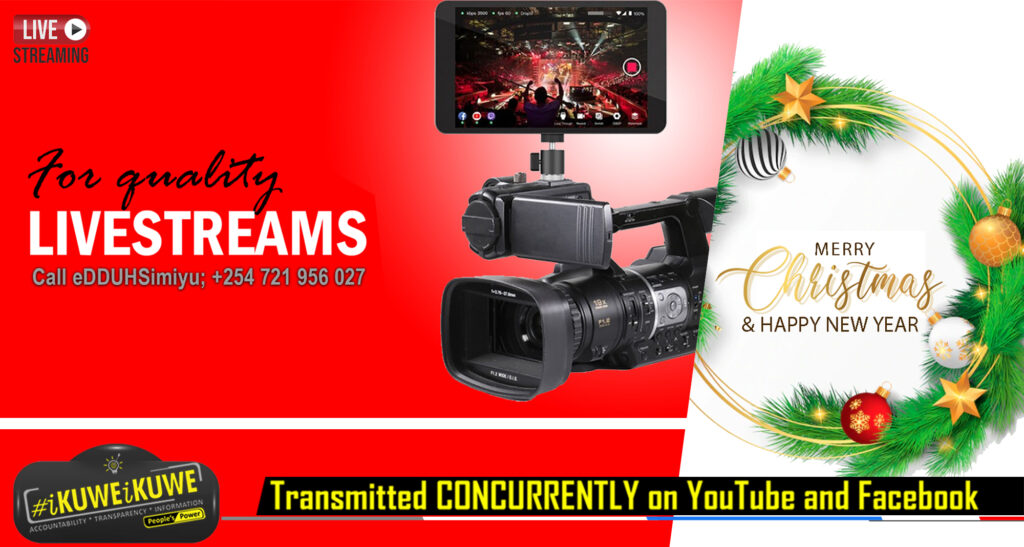 3.9 That, Muslims will be considered in the appointment of CECMs, Chief Officers, and Directors positions.

3.10 That Muslims will be considered in the employment of County Staff.

3.12 To allocate land for Muslim Cemeteries at least in Bungoma Town, Kimilili Town, Chwele and Malakisi

3.13 Consider a position of a Muslim Chaplain within your setup.

3.14 As a minority group, Muslims should be given a chance to give their input on various decisions to be reached at by the County in terms of project implementation, Policies, Rules, and Bills.

3.15 Consider the creation of a special fund (equalization) for uplighting Bahati (Mujini) slums and other like areas within the County.

3.16 Last, and most important, it is expected that the Rht. Hon. Lusaka will run his campaign with utmost sobriety and in peaceful nature.

4.2 This MoU is between the Rht. Hon. Kenneth Lusaka and The Bungoma County Muslim Faithful, it is not bound by extension, to the Party that the Rht. Hon. Lusaka subscribes to, neither to any other affiliation Party of any sort.

Ikuweikuwe.com has also details of the meeting between Lusaka and Muslims on 3rd Oct 2022 as follows; 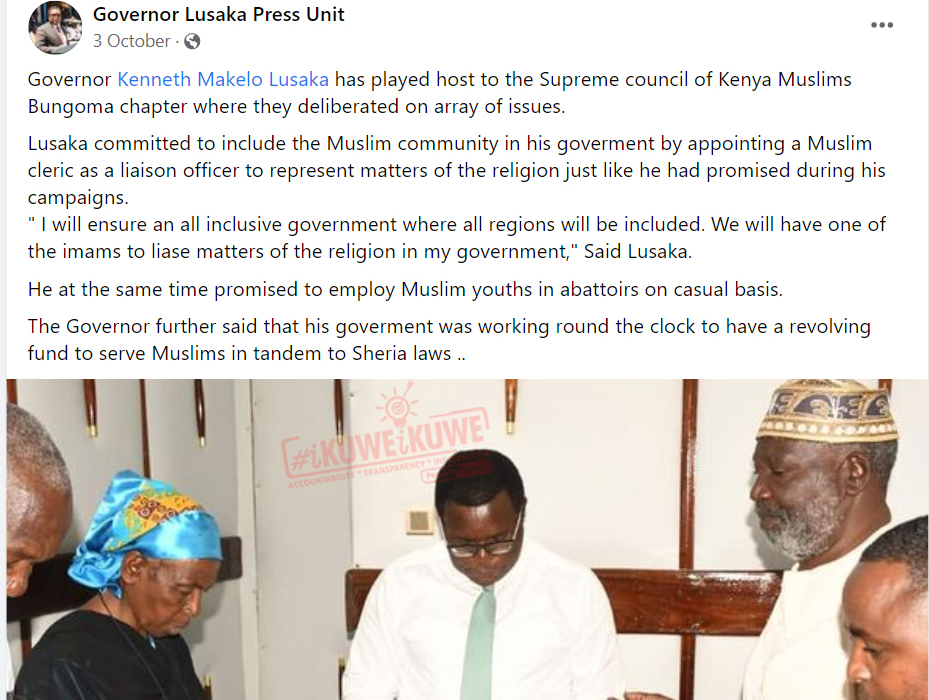 “A very good morning Edu. I am only 3 months old in the office. I ask our people to be patient as I reorganise gov. Most of these things require time. In the fullness of time we shall implement.”