Webuye West election petition has taken a new twist as the court is slated to rule on the validity of affidavits by Independent and Boundaries Commissioners .

The petitioner, Kelly Walubengo through his lawyers made an application to struck out submissions by independent and boundaries commission(IEBC) due to allegations of fraud in commissioning the affidavits .

The application was made after a revelation that the lawyer who commissioned the oath for IEBC and six other witnesses is not eligible and authorized as per the law .

Bungoma High Court judge William Musyoka has reserved 30th of November for ruling after admitting the application by the petitioner’s.

The petitioner’s have accused the respondent of procuring it’s evidence through fraud and forgery.

The Judiciary service commission has written a letter dated 25Th November 2022, disowning the membership and validity of the said lawyer.

Steve Nyaribo , lawyer for the petitioner told the court that the said person who commissioned the oath is missing in JSC record and asked the court to render the product of her work to annuity. 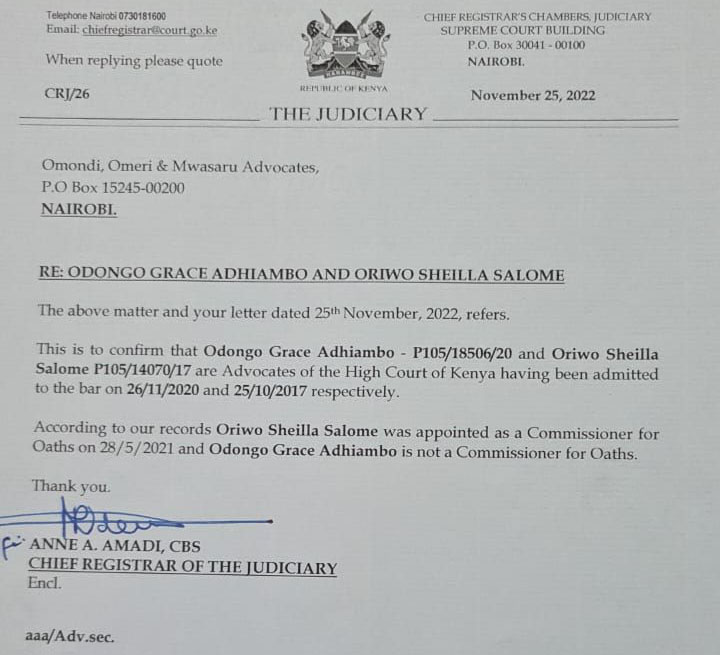 “The said affidavits are in contravention of oath and statutory declarations acts and should be struck out of the court record” , said Nyaribo.

IEBC legal team told court that they have written to Law Society of Kenya for further clarification about the status of the said lawyer.

Mr Olloo, however pleaded with the court to ignore the technicalities of the case and determine it on merit.

He said most of the documents that the court will rely on for determination is with the custody of IEBC and hence the predicament the prayer would render to the case.